This week I've been channelling Minority Report and pondering what the future with a Fundraising Preference Service (as conceived under the current proposals) might look like. 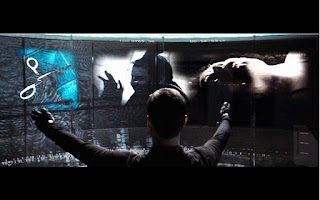 As my last post might have indicated, I'm not the world's biggest fan of the Fundraising Preference Service as it's currently conceived. In summary, my views are as follows:

Should it be easier for supporters of charities to manage the communications they get? Yes.

Should there be a Fundraising Regulator capable of ensuring Fundraising bodies adhere to the Codes of Practice? Yes.

Should Fundraising bodies who ignore the Codes of Practice be held to account? Yes, absolutely.

These things will bring Fundraising into alignment with all other professions and ensure that bad practice takes no root.

Will the Fundraising Preference Service as it's currently conceived do this? No.

Is there a better way to achieve the above? Yes.

Are alternatives being considered? It appears not.

According to research conducted by Nfp Synergy, a lot of people seem to be just about ready to string up the gallows and settle down to watch a good hanging. The Minister has promised a fundraising reset button to make all those charities just go away and research by NFP Synergy shows that two thirds people are interested. Really interested.

That should be terrifying for every single one of us who has needed help from a charity, which, by the way is more than 9 out 10 households in the UK (4 out of 5 in the last year and over half in the last month). Because research and analysis by think tank Rogare suggests that if all this comes to pass, it could take £2 billion out of the sector. Let's count that again: £2 billion.

£2 billion stripped away from homeless shelters, cancer research programmes, animal rescue, dementia nurses, suicide prevention lines and all the many other services and programmes charities provide.

Just to put that in context, it's now estimated that developing a new cancer drug costs $5 billion - over £3.5 billion. With 1 in 2 people born after 1960 likely to develop cancer, is this type of dip really something we can afford?

I sometimes wonder what his experience would have been like without those organisations and supporters. I hope that no teenager in the future ever finds out.

So when Michael Grade talks about a short term drop in income being a small price to pay for rebuilding public trust it feels personal. It should feel personal to all of us, because regardless of what the papers say, fundraising is crucial to the fabric of our society.

I've yet to see analysis of the impact of all this on beneficiaries but by god, I hope that somewhere, sometime, it occurs to someone to look at it - before it's all too late.

By all means regulate fundraising organisations.

By all means ensure that people have a way to escape a deluge of mail and calls.

Charities welcome that too, you know.

But don't break the bond that enables people to connect with causes - and don't encourage people opt out unless they really, truly understand what that means. As Adrian Sargent points out, given the complexities of the sector, it's highly likely that they won't.

Let's take a moment to think about what an FPS future might hold.
(that is, after all, what this post is supposed to be about)

I've already described what that might look like: a £2 billion drop in income across the sector. That's more than an ouch that's a catastrophe. The double bind with this is that charities will struggle replace this lost income with initiatives which generate income in other ways, because they are denied the tools that capitalism (for better or worse) offers their for profit cousins. They are judged, condemned and found wanting - even whilst we are in need of what they do.

If you're a charity hovering around the £1 million fundraised income mark and you don't want to start wasting spending your hard-won fundraised income on supporting the FPS or screening every communication with them, making your fundraising programme prohibitively expensive and pushing up the amount you have to spend on fundraising versus services, one option might be to set up another charity. For example, a university might have a charity for medical research, one for student support, one for sustainability...  a pain, yes, efficient, no, but some might think it worth it to avoid the expensive labyrinth that the current proposals offer.

As Dan Palotta points out in Uncharitable, charities are held to an outrageous double standard, possibly driven by a discomfort with what charities make us think and feel about ourselves (see Ian McQuillan on what drives public hostility towards fundraising). With FPS people slough off that uncomfortable sense of duty which makes us feel compelled to give and avoid seeing those disturbing reminders of what's happening in the world. Effectively, we create a rose-tinted filter for ourselves. Our post, emails and telephone calls are made up of missives from Amazon and Virgin and all those other companies generating profit from that vital pound in our pocket. And because those companies are smart, they are rapidly infusing their brands with social values - so we feel good about spending money with them.

Our benevolence benefits us and we can get the feeling that maybe it's benefiting someone else too - despite the fact we are giving it to organisations which are driven by the needs of shareholders not beneficiaries. That is a very crucial difference. If you go back to the drug development example, for-profit organisations which need to prioritise share holder profit might struggle to justify investing in treatments for rare cancers which affect fewer people when much more money can be made in developing treatments which tackle-age related diseases. But as a relative of someone who died from a rare cancer, I'm really glad that there are charities willing to fund trials to find treatments and cures where other organisations might not.

Of course, charities are doing this from an uneven playing field - see the next point...

It has to happen doesn't it?

When times get tough and finances get tight, people become creative.

The challenge with this is that charities  - especially those operating in the voluntary sector - are at a massive disadvantage compared to for profit rivals, who can pay competitively, take time to build and spend, invest significant funds in advertising and accrue significant sums of money for future investment. They won't be criticised over CEO pay or over their overheads, so long as they are creating wealth. It's okay to spend money on these things as long as the result is an increase in profitability. It's not okay if the result is raising more money to, for example, spend on cancer centres, or homeless shelters or animal rescue or human rights campaigning.

Charities aren't permitted to use those tools. Not unless they stop being charities. And that's a disadvantage which seems to stem more from an ideological view of what "charities" could and should be than it does from anything else

After all, if you're trying to solve really complex, globally challenging, multi-dimensional problems is makes sense to work as effectively as possible. Yes, charities should maintain their core values. Yes, vulnerable people should never, ever be exploited (the same, is is hoped, would be true in the for profit world). But if we want charities to solve big, huge hairy problems do we really want them to do it with both hands behind their back and hopping on one leg?

So I guess, when thinking about the Fundraising Preference Services and all that it entails, we all must come back to the question of:

Consultations on the Fundraising Preference Service closed today - did you make your voice heard?

Other related posts on this blog:

Three years on from the other telephone call

Three years on from that telephone call