Three Years on from THAT Telephone Call

Is it really three years since I wrote about being mentally bludgeoned with Chinese medicine, the plight of the tigers and goddamnit more tigers in what might well be the world's worst fundraising phone call? 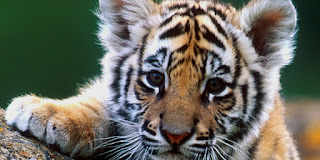 And in that time the fundraising world has spun on its axis and ended up teetering precariously like a dirty dish on the edge of a sink piled high with crockery (alright, I'm looking at my own kitchen right now).

Well, as it happens it must have been time for an upgrade because a couple of weeks ago I got that phone call again. From the very same charity that REALLY WANTED TO TALK ABOUT TIGERS. A bit of me was impressed by their confidence. I feel like applauding that charity for daring to call anyone in the midst of the welter of fundraising angst we've all been negotiating. But the resentment from that earlier phone call lingers.

I don't want to talk to them. Ever.

"Hello, I'm calling on behalf of [insert name]. Have you got a minute to talk?"

In my head a red warning sign pings up: OH NO IT'S THE BLOODY TIGER PHONE CALL. NO NO NO. But this time I'm ready. This time I'm set. "Is this a phone call about upgrading my direct debit?" I ask.

So I take my own advice on how to communicate with charities. I'm straight with the caller. "I'm registered on the telephone preference service and I don't really want to be called. I'd rather be contacted by post or email."

Simply because they've listened to what I want. 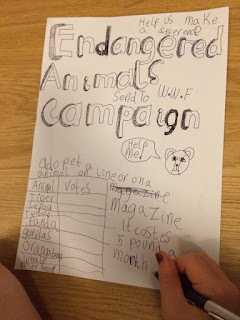 The next week my daughter draws a poster about endangered animals inspired by Newsround (good job Newsround).  I'm thrilled! This is what I wanted for her. I wanted her to care about the world she's growing up in.

She's upset about animals being on the verge of extinction so she decides to act. Her instinctive response is to a) raise money and b) encourage other people to take action.

I love the fact that her response to wanting to make a difference is to give - and raise - money. That's what fundraising is all about.

I show her the [tiger] charity's website and explain that we adopted a tiger on her behalf. Immediately, she wants to know about her tiger. She wants to hear the difference our money is making.  I realise I've moved house and not updated the charity with our new address.  I make a mental note to send them my details because I genuinely want to my daughter to hear about the difference we're helping them to make.

I love the personal touch that the charity has given us through twitter. Twitter has the potential to make every Twitter-using donor feel like a major donor. Immediately, I feel warmer still. I show my daughter their response. She's delighted too.

Overnight, that charity has moved from a god-im-tempted-to-cancel-my-direct-debit list to being on my preferred charity list.  Shortly afterwards I get an email from them and I read it. I watch the teaser video and see an ask. It's really easy for me to make a donation. I feel pleased, involved, warm. All my resentment is gone. I decide to send them a Christmas donation.

I'm glad that they're listening and responding, not bludgeoning.

2015 has truly been fundraising's summer of discontent. The summer has made me angry. I've been infuriated to see policy developed without an evidence base and disgusted by the appalling misuse of an elderly woman's suicide to justify a wholesale attack on the voluntary sector. I've been disappointed by the lack of response from trustees and charity leaders and distressed by the flagrant disregard for the needs of beneficiaries.  All around me I see the same vital services that receive less and less statutory funding, now facing a dramatic loss in voluntary income. I know people who need these services. I am terrified for them.

Despite all this, the experience I describe above gives me a feeling that perhaps there is a glimmer of light breaking into this long dark tunnel of fundraising gloom. When we had to take 60% of people out of our next telephone campaign, a wise colleague said to me, "Well at least we know that the people we're calling do want to be called. It's better data."

And maybe it is.

Maybe, just maybe, from this seething cauldron of shifting codes of practice and random policy making will emerge a greater focus on getting communications right. And maybe, just maybe, that will mean charities raise more money from their donors, because we're hearing from the causes we love in a way that works for us.

This is assuming that donors and causes are communicating with each other at all. It's assuming we're not dealing with the Fundraising Preference Services and its infamous "reset" button.

Let's rewind to my tiger phone call. In the white heat of fury I might have decided to can the whole thing. I nearly did. I might have said "Sod it. I'm going to put myself on the FPS."

And what would that mean?

No more e-mails from Amnesty International.

No lovely warm and fuzzy phone calls from my university.

No Christmas appeals from Capability Scotland.

No Save the Children. No Bloodwise UK. No bloody tigers (for the record, I love tigers. I love hearing about tigers. Just not on the phone, in my lunch break, when my noodles are congealing and I've said repeatedly that I don't want to talk).

In actual fact, I might stop hearing much at all because if charities can't embed a fundraising ask in their communications then they might no longer be able to afford to communicate at all.

When my disabled mum needs help from the Stroke Association.

When my teenage nephew needs the Teenage Cancer Trust to make chemotherapy bearable.

When my colleague's tiny daughter is born critically ill and need Yorkhill Family House to let him stay by her side.

When people I care about are threatened and need Amnesty International to give them a voice.

When my cousin's husband is dying and she needs a Macmillan nurse to hold her hand.

When my friend is alone and frightened and needs the Samaritans to answer the phone.

So here's my plea to charities: listen to your donors; talk to them where they're at, but for crying out loud carry on asking them for help. It's your duty to the people you are there to support. Respect your donors but don't stop giving them the chance to make a difference. That means listening. It also means asking.

And here's my plea to everyone else: if you want that charity to be there for you, for your family, for those people, creatures and causes about which you care desperately, stand up now. Speak up for those causes and their right to defend, protect and serve their beneficiaries - and to ask for funds to do so.

Don't support a broadbrush Fundraising Preference Service which would stop people connecting you with the causes you care about, but not stop you getting a gazillion automated PPI  and accident claim calls every waking hour, not stop your mum being inundated with takeaway leaflets, not stop that dodgy tarmac company knocking on her door. Make sure that whatever is put in place, it helps rather than hinders.

Speak up for fundraising and the charities it supports. If you don't, all too soon they might not be there any more. Not for the tigers and not for us.

Make your voices heard. Make sure that any changes that are implemented don't damage the vital work of asking, giving and changing the world.

This isn't about the fundraising profession. It's making sure that people have a chance to shape the world around them.

PS those who read the original article might remember that in the same period as the tiger phone call I also received a wonderful phone call from Nottingham University's calling team. More on that masterclass in alumni development soon...

Related articles on this blog

SHUT UP AND LISTEN!

Where is the voice of the beneficiary?