Three years on from that OTHER telephone call 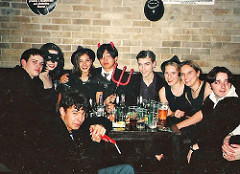 Just over 20 years ago I was coming close to the end of my first term at the University of Nottingham, majoring in English and Classics.  The weeks of university life had slid by in a blur of lecture-avoiding friend-making crisp-eating sociability.

Life on a campus university seemed kind of lame after growing up in the red brick metropolis of Manchester; the English department seemed all about grammar and post-modernism and people played rugby. Also, Southerners. Lots of Southerners from alien places like Kent and Bedfordshire. Eighteen year old me wondered if I should have gone to Leeds. I didn't know then that some of those Southerners would end up being friends for life.

And despite all the above there was always the Classics department. The wonderful, tatty, eccentric Classics department, presided over with constant welcome by the ever present Adrienne and comprising some of the world's most fabulous academics (who could ever forget Prof. Sommerstein announcing the meaning of rhaphanidosis in clarion tones?) - and a lot of goths. 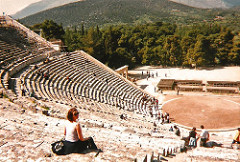 When finals drew near, I started to experience a sense of panic that I hadn't squeezed everything I could out of this best-days-of-your-life experience. So I stayed on, pursuing my very real love of Ancient Greek drama for another year, working in a way I hadn't for the previous three.

Then I left. London beckoned with its gold-paved streets and tube stop parties. Those university days were quickly forgotten - merely a stepping stone to adult life. Plus, Classics aside, I hadn't been that bothered about Nottingham anyway. After all, guys wore shiny shoes to the indie clubs there. Just not right.

Between then and now I must have moved house about fifteen times. My parents moved house too. If it wasn't for the fact that my chosen career was fundraising - and much of that in the higher education sector - I could well have severed all ties with my alma mater. But professional curiosity stopped me (it's always handy to see what other Development Offices are doing).

I updated my contact details and left it there.

Gradually, the university moved into campaign mode. I had no real interest in this. As a classicist, I didn't give a monkeys about achievements in medicine or shiny new buildings.

Still, I received a steady drip feed of emails into my inbox and sometimes I read them. Nottingham became something that glimmered away on the edges of my consciousness, like an old acquaintance who occasionally pops up in your facebook timeline. I knew what it was up to and that was enough.

But gradually - barely perceptibly and without my noticing - Nottingham was seeping under my skin. 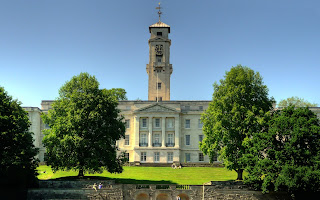 An alumni weekend was announced and to my own surprise, I actually thought about getting the old gang together and going. I didn't. Too many nappies and too much work to contend with. But still, it was nice to be asked.

I realised it was about more than a decade  since I'd met my university friends for the first time. We shared pictures on facebook, started trading memories.

Then I got a fundraising phone call. For a moment I was shocked. Damn, how did I get old enough to fall into a telethon segment? But then I felt a surge of pleasure, because that old friend who I'd vaguely kept track of had bothered to pick up the phone to me.

Obviously, I knew the aim of the game: a regular gift. But it didn't feel like that.

I was talking to a student, someone who had [literally] walked the same paths as me, someone who was on a journey that my friends and I had taken long ago. It was lovely to be able to ask questions about campus life and what it was like now. It was lovely to hear her talk enthusiastically about her course. We had a laugh. I knew the call was for the annual fund (in which I hadn't much interest) but I understood it was important to give where the need is greatest, so I agreed to a regular donation.

"Can I make a one off gift to the classics department too?" I asked.

"Of course! That would be wonderful!" she replied. She didn't pursue the Annual Fund script - instead she tried to answer my questions as best she could.

Being able to ask about what I was really interest in gratified me. It tickled my fancy to imagine my donation buying a few bags of crisps and a couple of warm bottles of cheap wine in the Agora AKA the Classics common room, or funding the profs beer money on that trip to Greece. But still, I understood the need for the Annual Fund. It was important. The caller helped me to understand that - she just didn't labour the point.

The deal was done and we both ended it pleased. Really pleased.

Because the thing about making a donation is that you suddenly feel closer to a place - or a cause.

Since then, the world of social media has opened up Nottingham for me, enabling me to reconnect with the aspects I really loved (all classicists should follow the wonderful @UoNClassics twitter account).

With the passage of time my university years have become quite special to me. That's not because they were the best days of my life. In fact, I'm quite sure I experienced some of my worst days too. No, it's because they represent a shared experience, something that informed my shape of my life, that brought friends to me who shaped and expanded my horizons and continue to do so today. It wasn't about getting qualified for a job (though it helped); it was about becoming independent, thinking for myself and learning from the unfamiliar, even when the unfamiliar played rugby.

I didn't always feel that way. For a long time I felt indifferent to my university. If someone had suggested that I would become a donor I would have laughed and pooh poohed the idea. Certainly,  I would never have opted in to being called about fundraising.

Those various interactions along the way - the e-mails, the direct mail shots, even the little pin badge that I would never in a million years wear, but (like a badly knitted woolly hat from a nice old auntie) I was pleased to receive all played a part in waking me up to the role that Nottingham had played in my life. They connected me to a part of myself I was pleased to rediscover.

If I hadn't received that phone call, I would never have donated. I know that perfectly well. That phone call turned a vague interest into a real relationship. It connected me directly to another human being and gave me a way to participate in the community we both had in common.

I am delighted that I donated. I'm glad that I was asked. I love the way I was asked. It's an example of all that telephone fundraising should be - a wonderful, immediate way to connect you to an organisation, like speaking to a friend.

It's not always that way, but this call was.

This whole alumni giving journey is another reason that I feel sad about the recommendations enshrined in the Etherington Review of Fundraising and the changes in fundraising commnications that the trials and tribulations of this year are likely to bring.

University fundraising operates in a different space to charity fundraising. People give to their old university for different reasons. It's a relationship which starts in your teens and can continue into your old age - longer than some marriages. For decades, UK universities have been getting better and better at building relationships with their alumni, giving them opportunities to connect back in with current students, to participate in the academic life of the university and inviting alumni to feel proud of the place that helped to form them.

In a post-Fundraising Review world all that good practice could be at risk. Will they still be able to contact alumni in the same ways?  Can they mention the students that need their help? The projects that could be of interest to them?  Will they be permitted to turn to the generations of people who have passed through their doors to ask for help?

Or, like charities, will these communications narrow themselves down to focus on the handful of people who ticked the box saying "Yes, opt me in to be contacted about fundraising?"

If someone had asked me that at graduation I would very politely have walked away. When I opted in, it was to say I was happy to hear from the organisation.  I probably would never have ticked that fundraising box. But I was glad to be asked.

Giving supported the institution, but being asked did something for me too.

I'm concerned for universities - and indeed, for arts and cultural sector organisations which fundraise in a similar way. I worry about what the future holds for them: spending reviews and funding cuts. It's never been more important to ensure financial resilience or to build warm, strong and lasting relationships with potential supporters, but to do that they need to be able to ask their alumni and members for help.

Charity fundraisers predict that their predicted fundraised income will drop by 14% next year as a result of the "fundraising crisis" and the changes it has wrought - catastrophic for the animal centres, people with dementia, vulnerable children and many many others who rely on their services. Universities won't be as hard hit as that, but they will be affected all the same.

And its important to remember that barriers to fundraising don't just affect beneficiaries  - students who wouldn't be able to attend university without a bursary;  seed-funding for world-changing science; access to rare and wonderful objects - they affect potential donors too.  If donors are never asked, they never have the opportunity to help.

And the act of helping is a wonderful thing.

Yes, it's important to respect the rights of the donor. Not to hound. Not to be overly insistent. I couldn't agree more. But in ensuring that happens, let's make sure that something precious isn't destroyed in the process.

Related Posts from this blog

Three years on from THAT phone call

SHUT UP AND LISTEN!

Where is the voice of the beneficiary?
Posted by @collectivemarg at 06:52