Did you know that over 9 out of 10 British households have used a charity's services - and four out of five housholds have used charity services within the last 12 months?

Charities are part of the fabric of our society - but what do we really mean by charity?

The word "charity" comes from the French word "charité" which in turn derives from the Latin word "caritas". Originally caritas meant dearness, costliness but gradually it became more equated to love and in the King' James Bible was used as a translation of the Greek word "agape". Unconditional love. Love for your fellow humans.

You might recognise the passage. It's from St Paul's Letters to the Corinthians is a favourite at Christian weddings. It goes something like this:

In the King James version the word "charity" is used instead of the word "love". Charity suffers long and is kind. Charity does not parade itself. 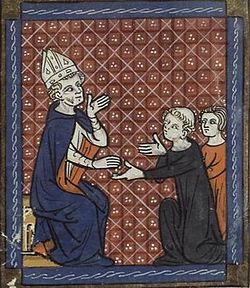 Those are the origins of the word which is used to describe the type of organisation for which many of us fundraisers work. Charities were born from the act of charity - the practice of giving alms. Almsgiving was a widespread medieval practice and it was one that helped to structure the economy and legitimise the social hierarchy.


In medieval times, the economy wasn't based on wages, it was agricultural - based on rents and taxes and tithes. Your average medieval baron wouldn't have a large paid workforce, but he would need extra people at peak times of the year (say harvest time): the medieval equivalent of a zero hours contract. In between those times there wasn't much of a financial safety net for those labourers. Alms had the useful function of making sure that those on the bottom rung of the social ladder neither dropped dead of starvation nor rioted nor turned to a life of crime.

It might have been possible to achieve the same thing through dropping rents or using violent coercion but these methods didn't have the positive benefits of almsgiving: peer admiration and most importantly, divine approval. If you wanted your place in heaven, you gave generously.

In medieval times, the wealthy didn't expect much from their giving apart from a touch of deference from the people that they ruled. They didn't get into the business of judging who was and wasn't deserving of charity. That was a concept which flourished in the 19th century along with social activism and the alignment of philanthropy with business interests. In the 19th century charities played a key role in addressing global issues and were crucial to the abolition of slavery.


But not in medieval times. No, in its earliest days charity was about making sure society didn't fall apart. In an absence of state intervention, it was about plugging the gaps.

So what is charity about today?

These days we seem to have a confused relationship with charity and charitable giving. It's open season on charities. Today, an MP warned charities that they were in "last chance saloon" over "vile and disgusting" fundraising practices. Last September, the Government's Charities Minister warned charities straying into the realm of politics was not what they were about and not what donors would want. Charities - he famously said - should "stick to their knitting".

All of this comes at a time when public funding is under massive pressure and services are being cut. Today's budget removes maintenance grants for low income university students, not to mention the cuts tax credits and furthermore, the UK isn't exactly awash with research funding to help us find the solutions to the massive challenges we face. Cancer. Climate change. Poverty. Dementia.

Increasingly, we look to charities - and the people who support them - to address these things. Big, hairy, challenging problems. But we expect them to do that without asking us for help and without challenging the status quo. It's not fair and it's not possible.

The fact is that charity has played a crucial role in holding society together for more than a millennium. And it has done that because people gave money.

But we're not living in a medieval society any more. Most people don't give because they're worried about bread riots and hellfire tickling their toes. Today, most people give because they are asked to give by a cause which aligns with their personal beliefs.

The main reason people don't give is because they aren't asked.

If we want charities to play a role in our world they need funding. That funding comes from benefactors. People become benefactors because they are asked to give.

"Our generation does not want its epitaph to read, 'We kept charity overheads low.' We want it to read that we changed the world, and that part of the way we did that was by changing the way we think about these things."

Rather than throwing rocks at charities, we should be examining the crucial role that they play in the 21st century and how best we can help them achieve the aims that will benefit us all.

If we don't like a fundraising technique, don't vilify charities - or charity fundraisers. Help them to innovate, to better support changing the world. Doing so will benefit all of us.

Charity Street: the value of Charity to British households (CAF 2014)