Campaign Planning is a messy business

As a veteran of a number of capital appeals, I was recently to explain how to go about campaign planning. Superficially, the question should be an easy one to answer, and when I first started out in the world of capital appeals I probably would have said the magic formula was something like this:

target amount ££ = nice tidy gift pyramid achieved by identifying, cultivating and asking x4 prospects for every gift needed, plus a kick ass case for support and sufficient resources to do the cultivation/asking bit. Simples.

The reality is a lot messier. The neat plan/pyramid is a little bit more like this... plus a few more variables. 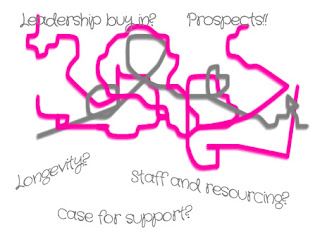 1. Is this your first campaign?

At the fantastic 2014 CASE Development Services, Chris Pipkins of James Madison University, USA demonstrated that your first campaign doesn't look the same as your second campaign or your third. A university (no matter how venerable) who is just striking out in the crazy world of fundraising campaigns cannot hope to emulate the success of an operation that has been established for two decades. Back in the early 2000s when I worked at King’s College London, I still remember the amazing day when a donor pledged £4million. The team then was around 14 people. Roll on ten years and the fundraising world was electrified at the news of KCL’s £20million donation. The team now is closer to 100 and embraces three hospitals too.

2. Can you retain your staff?

In the world of major gifts length of time in post is critical to success. Some fascinating research featured on Targeting Fundraising Talent suggests that it isn’t until their fourth year in role that major gifts offices start to generate significant output from their prospect portfolios. Anecdotally, I know this to be true. In my previous role it was possible to rank income generation in terms of longevity in post with the most effective income generator being the major gifts fundraiser who had been longest in post and grown up through the ranks.

There are all sorts of reasons for this and the critical one is the importance of internal and external relationships. If you have known a donor – or a colleague – for five years, you have built up trust and knowledge. Where major gifts fundraising is all being bespoke and personal, longevity of relationship is critical to achieving these things. It also gives you time to practice and hone your technique.

Of course longevity isn’t the only factor here – you have to be good at your job too – but in this factor should give you some food for thought. For example:


The worrying thing about this is that in the fundraising recruitment world, major gifts officers are approached every five minutes about new jobs. There’s a skills shortage and a lack of big gift experience.  But if you’re going into campaign you need them to stick with you the whole way. And you need to give them the time they need to practice and become successful. It doesn’t happen overnight.

3. How are you finding your prospects?

Back in my salad days as a fundraiser, I thought that identifying prospects for campaign feasibility was a fairly simple business.  You had your data screened by a prospect research agency, populated a nice shiny gift table, did some profiles, identified your top 100 and started to contact people. But as I discussed in an earlier post, it’s not as simple as that. The more data we have on prospect conversion rates the more we know it’s not a straightforward 1:4 ratio.

For example, research from The University of Edinburgh’s PaulWeighand suggests that where fundraisers identify prospects, the conversionrate from prospect to donor is higher. I get that. A prospect who you discover via your organisational or donor networks is already much closer to you than a faceless name on a page. This rather underscores the above point about longevity in role for fundraisers – it takes times to build those networks. But how on earth do you account for that complicating prospect conversion factor when working out how many prospects you need for your campaign? Are you looking at multiple gift tables? Hyper sophisticated segmentation? Maybe there’s something we can learn from Direct Mail here!

4. Do you have enough staff and resources to convert your prospects into donors?

You have 100,000 members or alumni on your CRM systems. Wealth screening suggests that 5,000 of these people have the capacity to make a donation of £25,000 or more. Your intention is that 1 in 4 of those people will make a donation at their suggested give amount. BRILLIANT. You’ll hit your £31million target in no time. Let’s get started!

But wait a minute.

You only have one fundraiser. And if they are going to do their job well they’re only going to be working with 80-120 people at any one time. With a dynamic pipeline, let’s say that they’ll work with around 300 people a year (maybe more).  At this rate it will take them the best part of twenty years to see those people. Your project needs to be complete in five.

All too often in the world of campaigns, we’re presented with a “stretch target” that in no way relates to the staffing levels or backroom support available.  As Campaign Director, a critical part of your role is to clearly articulate the staff and resources you need in place to turn those prospects into donors.

And if your resources are limited, you need to be very focused in your approach – the pareto principle is critical here.

This is also a good reason not to widely share the results of your wealth screening, unless you are a. Rumpelstiltskin and b. have a tower in which you can spin gold.

5. Is your organisation engaged?

Sadly, it’s not all about you. An organisation in which fundraising is solely the preserve of the fundraiser is doomed to limited success. Fundraising is a whole organisation business, from the Chief Executive to the most radical campaigner to the person who picks up the phone to random enquiries. You all need to know what you’re trying to achieve. You all need to back it. That’s because campaigns are all about networks. They’re about building an ecosystem of donors and champions internally and externally. Someone interesting call up? You need to know.  A donor is interested in an aspect of your project? You need to know you have your Chief Executive’s backing and that the success of this appeal is their number one priority. Need to invite someone in to get the inside track? You need to be able to trust that your campaigner / activist/ service delivery colleagues will sing from the same hymn sheet.

Is there a real need in the world for the thing you are trying to do?  Will a building help you meet that need? Will it realise an opportunity or answer a crisis? Are you the best people to deliver on that opportunity or crisis response? Can your donors really have an impact on what you’re trying to achieve.

I’ve written before about the need to avoid Impossibly Monstrous Projects using the Fundraising Collective’s highly sophisticated traffic light system.  Make sure that you do. In the past I’ve been asked to raise money to strip the asbestos out of a building. To reclad some tiles. These were internally driven needs. There was no vision there. There was no societal change. They weren’t suitable a capital appeal.

Well conceived campaign projects are critical to your campaign success. And if you need to add ballast to your argument for or against a particular project, conduct a feasibility study and canvas your donors’ views. If they think it’s a turkey, it probably is.

To get to the beating heart of your project ask yourself "Why is that important?" at least four times. The answer should be life changing. 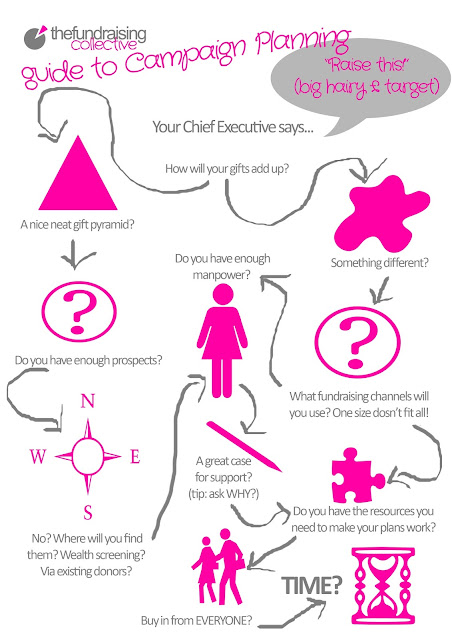 No two campaigns are the same. No campaign planning is perfect. But if we want to have our best shot we need to take more into consideration that prospects and a few key events.  Our planning and modelling needs to take into account:
·        Our maturity (as a fundraising operation)
·        Our experience (as fundraisers)
·        Our prospects (of course)
·        Our resources
·        Our organisational readiness
·        The perceived worth of our projects

And in terms of gift tables and modelling, we should perhaps be taking a leaf out of the Great Book of Direct Mail and considering more sophisticated segmentation, which takes into account prospect source alongside recency, frequency, value calculations.

The holy grail is a campaign model which is much more sophisticated than what we have now. That tells us which prospects are likely to give in the first 12 months and which will take three years, which varies conversion rates by prospect source and considers the maturity of a fundraiser's portfolio. Can it be done?

There's a mars bar in it for the person who cracks it!