The warm glow - and what to do next

Recently I arrived home to a small purple envelope with my name and address attached on a label. When I opened it, therein lay a wrist band and a postcard. 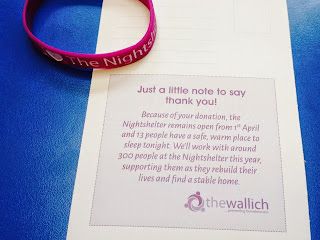 “Just a little note to say thank you

Because of your donation, the Nightshelter remains open from 1st April and 13 people have a safe warm place to sleep tonight. We’ll work with around 300 people at the Nightshelter this year, supporting them as they rebuild their lives and find a stable home.”

I tried to remember which Nightshelter this was. And then I recalled, I had supported a Crowdfunder appeal for a Welsh shelter (with a very modest donation) some months ago. I don’t live in , but I remember seeing that they were just a few thousand away from their £21,000 target. Cuts to local authority funding had left the emergency nightshelter, run by a homelessness charity, in danger of closing. I wanted to help, so I made a small donation.

And now what a lovely surprise through the post. For a moment I was not a fundraisier – I was a donor, and it felt marvelous. I received a truly ‘warm glow’ and felt suitably smug that little old me, had made a difference.

After this initial moment of feeling like a donor, I reattached my fundraisers cap. I had a warm glow – but what now?

Most importantly this little pack genuinely moved and surprised me. I felt really pleased that I’d help the Nightshelter.

But have they maximized on this good feeling? I think perhaps not – and this is why:

I’m sure some donors were already aware of the charity, but I was giving because they were near their target on crowdfunder and I thought it was a brilliant cause. The charity name is on the card – the Wallich – and a quick google found them online. But they’ve not made it easy for me to find out more – and the website is good – so they should have at least given me the website address on the card.

There’s also no call to action. Personally I feel they could have asked me to make another gift – to ensure the Nightshelter’s future – but even if not that – do they want me to visit the website? Sign up to the newsletter? Follow them on twitter?

There’s no hand-writring on the card. There’s a space for writing at the top of the card, and it’s noticeably empty. For donors who gave significant amounts – let’s hope there was a hand written thank you. For the rest of us – office printers can now print in a blue ink that looks a lot like handwriting – so this would have been a nice touch to give the illusion of personalisation.

I hope that they have added me to their mailing list, and will be following up with an ask in future – but only time will tell if they do. The crowdfunder campaign was inspirational, and it strikes me that they are doing important work on very limited funding - so hopefully this has generated a warm prospect list of potential donors.

I’ll keep you posted if they ask me to give.

You can find out more about this homelessness charity here  and can read more about the successful Wallich Crowdfunder appeal here.