March Digital Campaign of the Month

This week, Collectivist Marg has once again been pondering the wild and wonderful world of digital. Last time I blogged about this, I asked if you were ready. Because digital, my friend, is here.

I'm seeing digital as a game changer. Not an income generator in its own right, but the piece of the jigsaw which will help our community fundraising take a stratospheric leap forward. That will help us to be super smart in developing corporate partnerships. That will give us donor insight beyond our wildest dreams. Oh, and let's not forget personalisation. Digital will help us to reach out to our donors with highly personalised, highly targeted engagement.

Alright, it's not a silver bullet, but it can let you do some pretty cool stuff.  Let's take Thunderclap for example. Thunderclap is a campaigning platform. The premise is simple, but effective. Get a minimum of 100 sign ups from willing participants, and Thunderclap will fire out a thunderclap e.g. a timed tweet / facebook status update / tumblr blog across your participants social media platforms simultaneously, creating a great disruption in the force stir on t'interweb. That's a Thunderclap.

So how does that work for fundraising?

My Superstar Campaign of the month is the Young Women's Trust's #everydaySHero campaign, which is Twittering and FBing around the place.

I love the idea of the campaign (nominate a woman in your life who is a hero to you) but I also love it's beautiful economy. It kills two birds with one stone.

1. It furthers the aims of the charity by highlighting great and positive role models for women
2. It brings new potential donors through the charity's [virtual] door

I was made aware of the campaign by Fundraising Director @TodVictoria mentioning it to me directly on twitter. In one of those strange twists of serendipity, a digital wizard I had met that week had been enthusing Thunderclap's potential. I was intrigued.

I liked what I saw. So I signed up.

Then I emailed it to about 50-80 people. And I put a link on Facebook. And on Twitter. In other words I became a digital brand ambassador for the Young Women's Trust - who 24 hours before, I had known nothing about. 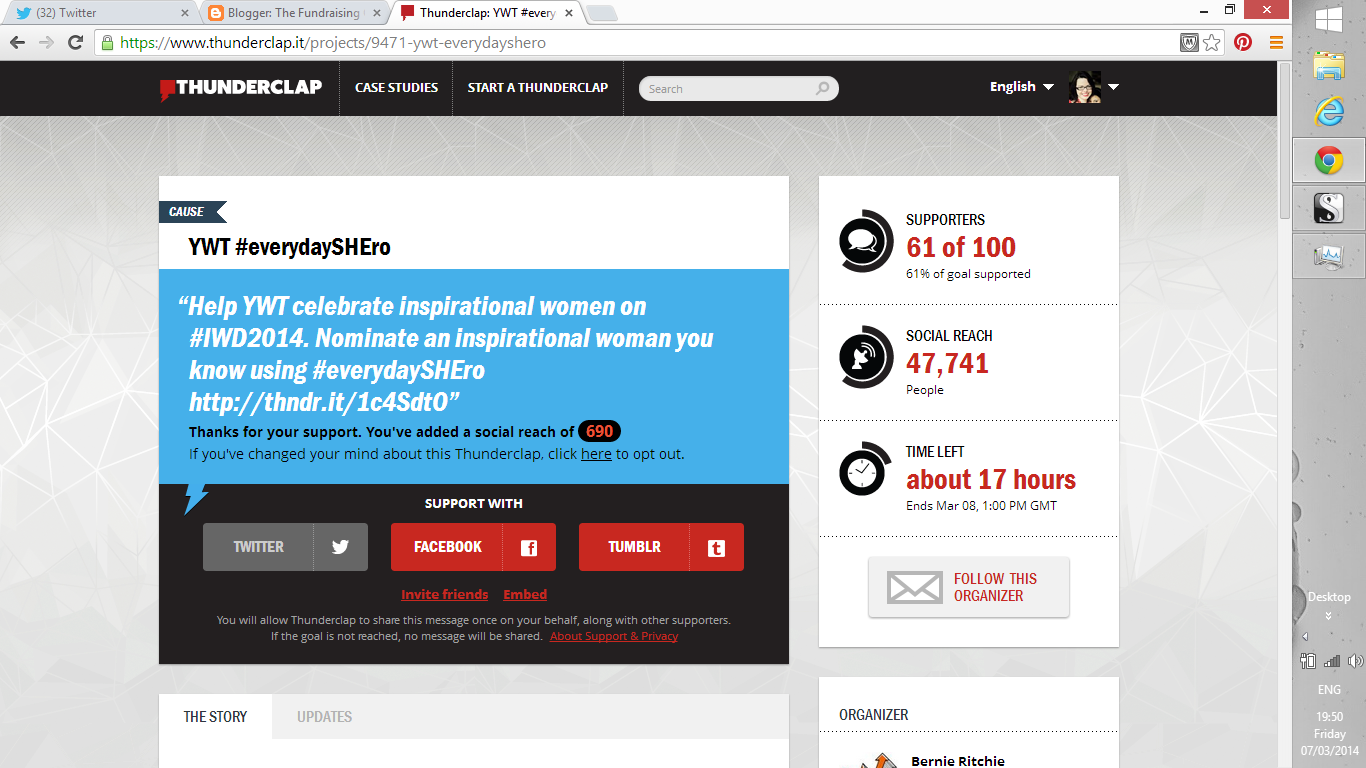 But by acting on their behalf, I became invested in their success. I WANT to see that Thunderclap get to 100. I want it to see dozens, hundreds, thousands, millions of  #everydaySHEroes celebrated on International Women's Day tomorrow.

There is an option to donate to The Young Women's Trust, but it's not the major thrust. I think the key to this fabulously engaging campaign being a success for fundraising is going to be the post-campaign conversion.

How do you turn people like me - warm prospects who are interested in the campaign, time poor, never open mail, get a million and one emails - into donors?

I guess, by asking.

I'm looking forward to it. And in the mean time - good luck to The Young Women's Trust and don't forget to nominate your #everydaySHEro before 1pm tomorrow.