Social Media. Dos and Don'ts for Being a Social Animal.

Social. Let's think about that word for a moment.

What does it mean? 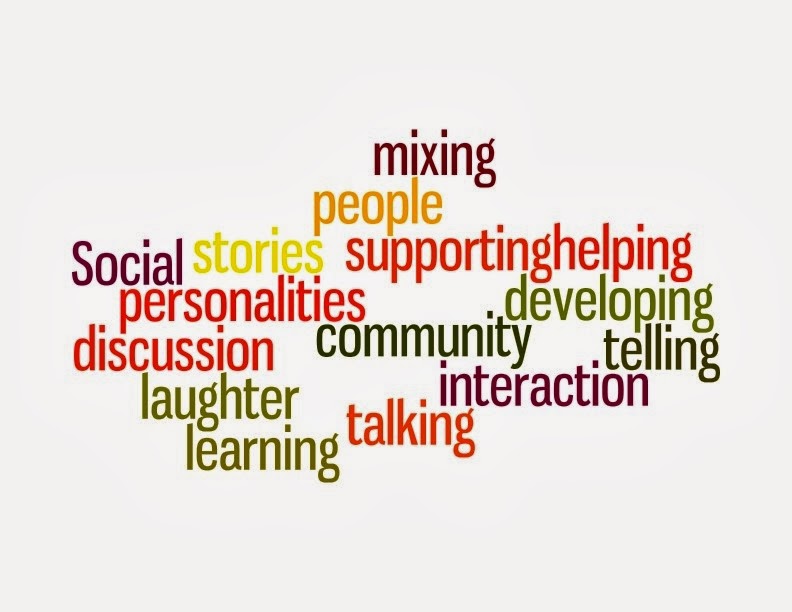 adjective
1. relating to society or its organisation
2. needing companionship and therefore best suited to living in communities

noun
1. an informal social gathering, especially one organised by members of a particular club or group

Fundraisers. Come on, sit down. Can I get you a cup of tea? Coffee? Beer?

I want to have a little chat to you about what social media is.

Imagine this scenario. You walk into a crowded room. There's a whole bunch of people hanging out in one corner chatting with each other pretty intensely about something they clearly find of overwhelming interest.  You can't quite work out what all the acronyms mean, but they're obviously having a great time. That's a little bit interesting and a whole lot intimidating. You give them a cautious glance and proceed to the bar.

Two people are standing at the bar. They look kind of similar, except one is talking. Not with anyone, but at anyone who cares to listen. "My career is sooooo fantastic and my kids are doing sooooo well at school and I know soooo much stuff about stuff and...."


Luckily, the second person at the bar smiles and tell you they're pleased to meet you. They ask you how you got to be at the event and what your connection is.  Pretty soon you've uncovered a common interest. "I've got some great stuff on that," Mr Interested tells you. "I'll send it over to you - be sure to tell me what you think."

"Now, let me introduce you to some of these guys over here," Mr Interested says, waving in the direction of the people you saw when you first walked in the room.  "Alex and Dorothy are mad about that stuff. I think you'll find them really interesting."

Before you know it, you're in the thick of the group chatting away.  Mr All About Me is still at the bar, talking at anyone who wanders close by.

So. What's the moral of that story?

It's a cautionary tale about the use and abuse of social media. Social media - Twitter, LinkedIn, Facebook - are super powerful tools for fundraising, but only if you use them right.

If you stand in the middle of the room shouting about your stuff to anyone who might listen, you're wasting a golden opportunity.

The point in these tools is interaction. It's mutual support. It's community. You might never see or speak to the people you connect with in this way, but that doesn't make the community any the less powerful or any less helpful.


Imagine getting an instant response to a complaint from a real person who actually acknowledges what you're saying. Damn. That's good customer service.  Social media allows you to do that. Better still it allows you to solve the problem publicly. Let that go viral.

Imagine being getting a thank you the instant you say something nice about a person or an organisation, no matter where they are in the world. A thank you from a real person.  It feels good doesn't it?

Imagine asking for help and getting an instant response from an organisation who knows exactly what you're talking about.  No, not from a faceless organisation but from a real person. Do you feel like you got a good service?  You BETCHA.

If you use tools like Facebook and Twitter well, you can give your organisation a voice and a personality. You can help people to feel a part of your community. You might be "Verity Tweeting On Behalf Of..."  but your warmth, sympathy and good humour can make your charity look warm, sympathetic and good humoured.

That means responding. It means participating.  It means asking. It means finding out.  It means dialogue.  It means not standing at the bar talking about solely your charity's triumphs/events/news, but talking to your supporters where they're at.

If I was to list my top three mega fails when I see charities screwing up social media stuff it would be these:


I'll never forget tweeting about visiting Manchester Museum and getting a tweet back from someone tweeting on their behalf. "Glad you had a great time. Have no fear, the mummies will be back soon in a great new exhibition - come again!"

Okay, I paraphrase. But it was something like that and it made me feel warm. Like  Manchester Museum were actually interested in the people that came and gawped at the mummies and at Stan the T-Rex. Like they cared if I had a good time. Like I could pop by and say hi any time. Like I was one of the gang.

And that, my friend, is social. Are you making your supporters feel like that too?