Let your charity speak for itself 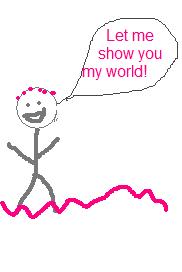 Last month I made the leap from the higher education sector back into the voluntary sector.

I loved working in higher education, but I'm thrilled to be working for a really fantastic voluntary sector organisation.  In the last few weeks I've been to services and centres in different parts of Scotland and met some of the most inspiring people it has ever been my privilege to meet.

Staff and services users alike have shared their stories, laughter and frustration, showed me some of the things they really care about.  They've given me a sense of their history, passion and enterprise.  I have really felt the friendship and warmth that exists throughout the communities they built. I got to smell the earth in the community gardens, touch the blankets a service user had crocheted for a local hospital and share the laughter that echoed off every wall.

Travelling back from these visits I've felt excited, inspired and moved to work as hard as I possibly can to get the resources these people need and deserve.  Bubbling with enthusiasm I've turned up home and tried to explain...

No matter how much I talked, it felt like a pale imitation of what I had felt, seen and heard.

What distresses me, is that most of the supporters - and potential supporters - of my charity won't get to experience what I've experienced these last few weeks.  If they did, we probably wouldn't need a fundraising team because people would spend every waking hour doing what they could to support this work.

I need to move beyond case studies and a written case for support to try to capture a visceral sense of what this is all about.  And I'm going to ask everyone to help me.

What do I mean by that?

One of the most powerful pieces of donor communication work that I have been involved with came about as part of a stewardship exercise.  Many moons ago, when Amnesty International UK was concluding its appeal for a Human Rights Action Centre, we spent some time asking people why they cared about AIUK and what the new centre meant to them.

People interviewed included staff, donors, prisoners of conscience... anyone and everyone who formed part of the AIUK community.

The result was an audio piece of many different voices all capturing a different, highly personal aspect of what AIUK meant to them.  Not just campaigners.  Not just celebrities.  All sorts of people, from all sorts of roles. It was profound, moving and funny - and about one hundred million times more powerful than the well written, carefully constructed case for support we had put together for the appeal.

On the night of the Centre's opening, we played it to the audience of donors who had enabled us to make the Centre happen.  It was one of the most moving moments of my life - and I don't think I was alone in feeling that.

So, fair fundraiser, here is my advice to you:

If you want to share the heart of your organisation stand aside and let it talk for itself.  Use every sense and every medium.

You might not be able to bring every donor through the doors, but you can create a window.