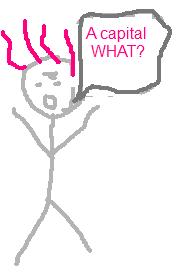 A couple of weeks ago you found me talking about IMP avoidance.  Imps, as you may recall are Impossibly Monstrous Projects.  The ones that are bound to fail.  The ones who will take you all with them.

Let's assume you have taken my advice and avoided an Imp.  You have been left with a capital project which has a half decent chance of success.  It has a Case for Support.  It has a prospect pipeline.

What IS a capital campaign?


This is a question I never realised  I needed to answer until I was faced with a room full of academics anxious about their university's next campaign.  "What about our project?" they wanted to know.  "If money comes in for the campaign, will it still come to us?" And more... "the campaign target doesn't match the project.  We'll need more/less than that..." (depending on the amount being discussed).

Here is the distinction, gentle reader.

A capital campaign is NOT the same as a capital project.

A capital campaign is an artificial construct created to focus the attention, energy and resources of your organisation on hitting a fundraising target for a specific project or number of projects. It is time limited shop window designed to attract your target donors.

A capital project is usually infrastructure that needs to be delivered.

Sometimes, a capital campaign IS raising ALL the money for that infrastructure project (s). Most of the time it's not. Most of the time that project will be funded by a complex mix of self investment, industry investment, public funding and private philanthropy.  Most of that isn't eligible to be counted in a capital campaign.  Moreover, most of that isn't usually the responsibility of the Development team.

Your task as a fundraiser is to draw out the aspects of the capital project which can attract philanthropic funding. The research labs.  The morgue.  The giant telescope. The dog memorial wall. The medieval archive. Or.... whatever.

That's what you pop in your shop window, dressed up in golden ribbons.  That's what you talk about.  And that funding is what will help to leverage all the rest.  The self investment and the big infrastructure grants.

Not an Imp in sight.

What I learned at the IoF National Convention and What I'm Going to Do about it
Learning to be a Strategy Superhero
Fundraising isn't just Fundraising. Fact.
Important Stuff every Organisation Should Think About.
Top Tips for Fundraising in our Times
Development Operations: Getting started