Keeping it real - and your supporters happy

I love Edinburgh during the summer festivals, really I do. I love that for four weeks every year, the city swarms with wide-eyed tourists armed with maps, guides, reviews and flyers. I love that on every corner there are artists and artistes - often in elaborate costumes and sporting outlandish face paints - shouting, posing, singing, chanting. I love that for this brief period of summer madness the streets and squares are full of pop-up bars, foldaway theatre venues and impromptu music spaces. Indeed - what is not to love?!


But all this - it is not the Edinburgh I fell in love with one January all those years ago. Sure, it is shiny and enchanting, but to me it is not 'real'. And it is not mine. 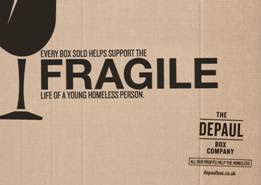 I have just stumbled across a marvelous piece of fundraising, promotion and initiative by Homelessness charity Depaul UK, which I thought was worth sharing.

They have started a company - selling boxes.

In their own words:

"Where we came from

The Depaul Box Company was started by a youth homeless charity called Depaul UK. Instead of just relying on donations, we wanted to broaden our horizons and act like a business to raise money, rather than a charity.

So we thought out of the box. Everyone associates the homeless with sleeping on boxes, so why not sell boxes to help the homeless?