How to analyse your appeal letter

It's called 750words. 750Words.com is a free website was originally created to help people keep track of their daily writing.  The owner of 750words, Buster Benson, also created another website called HealthMonth, which provides a similar function to 750words.com, except it helps people track their healthy activities.

The concept behind 750words and HealthMonth is called “The Quantified Self.” This means measuring pieces of your personal life so that you can feel motivated to continue with a course of action, whether exercise, writing, eating better, or some other edifying pursuit. How can you measure running every day, or what you eat? You report back to these websites.

With 750words, Benson wanted to help people write every day, and he came up with the idea that 750words is about as long as 3 pages, recommended in the book The Artist's Way as “Morning Pages.” I enjoy writing on this website very much, especially because it's private, and it gives me a sense of accomplishment, because it includes not just charts and analysis of what you're writing about, it also includes badges.

After writing privately for over a year on 750words.com, it occurred to me that I could use the graphing and charting aspects of this website to help people improve their appeal letters, to show them what they were focusing on.

I recently edited an appeal letter for H.O.P.E. Inc. (http://hopbe.org)  They are a nonprofit in Georgia whose mission is to help single parents finish college.

“Imagine working two jobs, going to school full-time, and coming home to an eviction notice the same week your child is scheduled to have brain surgery. That is exactly what single mother Yvette faced last month. The medical bills were piling up, with no family nearby, and no other financial options, she turned to H.O.P.E, Inc. for help.

“I came across HOPE when I needed them the most, my daughter was about to have brain surgery and my rent was due right along with my car note.” Yvette Pierce-Conner”

I put their entire letter through 750words and here is the result of the analysis:

Another thing that comes out of this analysis is that there is just one sense in the whole letter. If you want to help your readers really BE there, and feel what your main characters in your story are feeling, you want to have more than one sense represented.

The original letter is also mostly focused on US with YOU following a close second. In donor centered fundraising, according to Tom Ahern, you want to make the word YOU as frequent as possible in your appeal letters, because after their first name and pictures, that is what will provide a stopper to the reader. 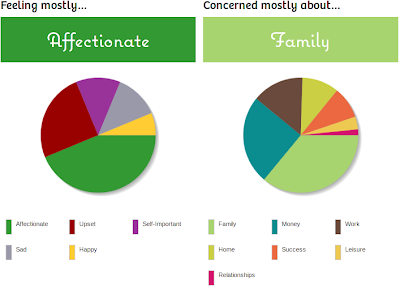 You can see from this second graph that HOPE Inc focused most on affection, then on being upset, then self important. So it doesn't have as much urgency as it should. People tend to give to causes that are filling a desperate need. Even if you don't want to share the sad stories about your cause, it's important to make it clear that they will not be helped unless donors give. It takes a lot to overcome donor inertia, and placing an emphasis on urgency will help them pick up the remit envelope and send you a donation.

Now that we've analysed the first letter, I started to edit this letter for H.O.P.E.

My second draft of the letter ended up looking like this:

Have you ever been caught in an impossible situation, where it seemed like there was no escape?
Dear <sal>,

But you have dreams of a better life. You want to get a college degree, and learn, and earn more money someday. So you're also going to college full-time.

You work 8 hours at a job, 4 hours at school, and then you need to come home and be a mom too. You love your children and pray they will forgive you for having to be gone so much.

But now imagine this. You get to your front door after a long, long day, and you see the yellow envelope.

The eviction notice. This is the week your child is scheduled to have brain surgery.  You're at the end of your rope. Where do you turn?


Is this letter any better at being donor centered or telling an urgent story than the first letter Let's look at this edited letter through the eyes of 750words.

As you can see, it's still focused on the present. The senses now include Touch, Sight, and Hearing.  This makes for a more engaging story. And is it donor centric? Well, the dominant pronoun is now YOU. So it is more donor centric than it was. 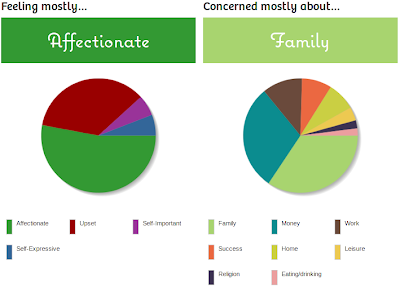 Looking at this chart on the left, you can see the urgency has grown., shown by the red section under “Feeling Mostly.” So perhaps this letter will make people feel the need to give a bit more.

Let's analyse a fundraising letter that had a 500% return

The writing of Indra Sinha made Amnesty International millions of pounds when it came out in the early 1990s in a London newspaper.

If you'd like to read all of his successful campaign writing for Amnesty, please visit this page on Sofii.org. http://www.sofii.org/node/238 What is his writing like? Well, one of his fundraising articles, called “Should we give up” concludes,

“Western Governments did not lift a finger to save the Kurdish people from slaughter until that power forced them to intervene.

That power is public opinion.

Pressure of opinion a hundred years ago brought about the emancipation of the slaves.

It is now for man to insist upon the same freedom for his mind as he has won for his body.

Think twice before saying to us, No, don't give up. You cannot ask us to continue, yet do nothing yourself to help.

The strongest voice on earth belongs to you. Use it. Join us. “

Sinha wrote some of the most successful fundraising ads and letters that the world has ever seen. He made the need poignant, and urgent. He is a master of effective writing. How does HIS writing look in 750words? I copied his entire piece, “Should We Give Up?” into 750words.com, and here's what came out.

The time orientation is focused on the past. In the piece he talks about the 30 year history of Amnesty International, and astonishingly, talks about a success that turned into a failure, as someone they released from prison turned around to become a dictator.

He uses 3 senses, with hearing is the dominant sense, and sight close behind it,  followed by touch. He tries to make you really be there.

He focuses on Us, and then on Them, and finally, he barely uses YOU at all. It's so fascinating! He tries to include the reader as one of Us. And it works!

What I couldn't copy were the many disturbing pictures in each of the ads, pictures of people being kicked on the ground, people with their heads chopped off, really gruesome stuff. That ALSO works. He spoke directly to the feeling of helplessness that people have upon seeing that sort of crime in the newspaper, and then he says, “But you CAN do something, you DON'T have to feel hopeless.” 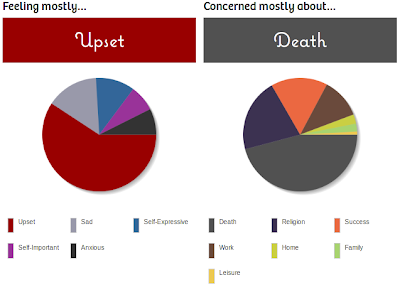 What were the dominant feelings in this piece?

According to the chart on the left, the most dominant feeling was being Upset, followed by Sad, then Self expressive, then Anxious. All of these urgent feelings came out of his piece, which created urgency in the potential donors reading his words.

What is he concerned mostly about? According to the chart on the right, he's focused on Death, followed by religion, then success, then work. Again, you can see how by focusing mostly on death, which everyone is afraid of, he again creates a sense of urgency, of “now or never” in his readers.

As you can see, there's no one right way to write an appeal letter, but if you can run it through 750words.com, see what your pronouns are, and watch your urgency. Plug in other successful appeal letters from a cause related to yours on Sofii.org and see what they focus on.

Let me know how it works for you!