Notes on a conference

Last week I was down in Leeds, Co-Chairing the Annual and Regular Giving Conference for CASE Europe.

Over 100 professionals (mainly from Higher Education fundraising) had gathered together to share best practice and see how they could do their jobs better.

Going through my notes, there were some real gems and plenty to do, so I thought I’d share some of my, as Bob called them, ‘Aha moments’ with you here.

The web, social media, facebook – they’ve changed how and what we share. Virgin Media being a pain – TAKE TO THE INTERNET. Yodel not delivered your package again – get on twitter.  Bought a new flatscreen tv that has ‘changed your life’ – well that deserves a status update if ever something did.

Like it or not – your donors are on the web – and we need to be creating positive experiences that they want to share with the world.

PS Your supporters are probably using a smartphone. Is your giving page smartphone friendly?

Here are ITV’s viewing figures for a random week in April.

How does it do this? Well it has several story-lines  running alongside each other with one coming to the fore as another comes to the end. Mark at Bluefrog has a super Eastenders visual that demonstrates this. 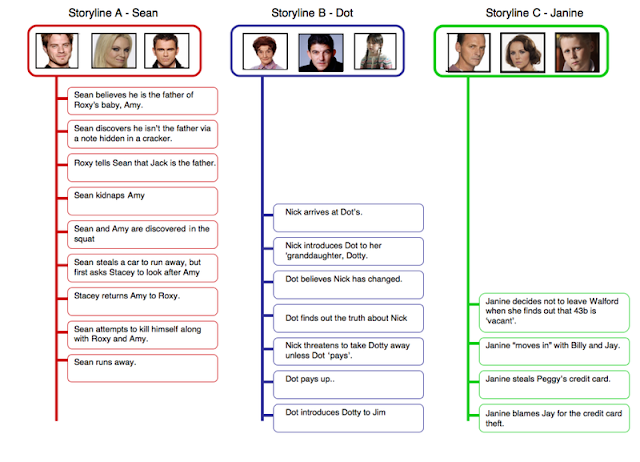 As charities we need to create our own story-lines – about our work and the people it helps. It’s what the public wants after all.

Ask for a story

‘Don’t talk back’ was the comment I often heard as a cheeky teenager, but how often do we ask our supporters to talk back to us? I’d suggest not very often.

The Association for International Cancer Research did, and in doing so, created a powerful appeal and a personal connection for supporters with the charity.

They wrote to supporters and asked them to share their own stories of living with cancer.

Using the responses they received, they created an inspiring and moving book of stories, called ‘Hot baths, Long walks, and Camomile Tea.’

You can read the book of stories yourself  here. The book was sent out to supporters as part of a legacy direct mail pack, and you will not be surprised to hear that it was a storming success.

At the University of Edinburgh we tried asking our bursary donors to talk to us – well - to the students their donations were helping, and received charming and personal messages to pass onto our bursary recipients. We created a pinterest board of them here to share with other alumni.

This idea, inspired by Womankind, gave our donors a voice, and gave us a real insight into why people were supporting bursaries at the University. And insight into the reasons why people give, can only ever be a good thing.

What story can you ask donors to tell?

----
Thanks goes to all the speakers and delegates of the conference, for their ideas and enthusiasm.