Is your Cultivation a Swamp of Sadness?

If you were a child of the 70s or 80s this scene probably had you weeping into your big sister's Duran Duran t-shirt.  Damn, it still has me blubbing now.  The boy is Atreyu, a key protagonist in the Never Ending Story.  The horse is his beloved Artax.  Atreyu is a boy with a goal; he has to save Fantasia from the Nothing.  Unfortunately, on route to doing so he and his horse stumble into the Swamp of Sadness and Artax, beset by despair sinks beneath the glutinous mud forever.

We fundraisers have our own Swamp of Sadness.  A place where relationships founder and become stuck forever.  A place we can never escape.  It's a place from which we must escape if we are ever to achieve our goal.

Ah cultivation.  That key period of the major donor fundraising cycle.  The nice bit with champagne and events.  The dating before the proposition.  The getting to know you.

Or at least it should be.

In the major donor cycle, cultivation should be the period when we're getting to know our prospects.  We're finding out what makes them tick, discovering what they want to change about the world.  We're meeting their family, getting to know their friends.

Except far too often, we're not.  We're organising dinners and receptions because we perceive that these are key to major donor cultivation.  In short we're hiding.

You don't get to know someone down the pub by standing on the opposite side of the bar and occasionally offering them a plate of pork scratching.  You get to know them by sitting down at their table and chatting.  Then exchanging numbers and chatting on the phone.  Finding areas of mutual interest.  Meeting their family and their friends.

You don't get to know a major donor by standing in a reception.  You might organise really fabulous parties.  You might get a great turn out of the good and the great.  Will it bring you closer to achieving a major gift?

Not unless it's married to bespoke and individual major donor moves.  The things that get you into someone's head.  Things like:
If you want to get past the Swamp of Sadness and develop a real, genuine solicitation strategy think PIG.  Personal.  Individualised.  Growing.

(Okay, "developing" is a better word than "growing" but it makes a crap acronym).

A real, move orientated cultivation activity will make your prospect feel special.  It will be personal.  It will be individualised.  And it will be growing the relationship towards a goal of mutual satisfaction.

A real, move orientated cultivation activity will help you to know your prospective donor and help them to know you.  You will start to understand what they want to change about the world and be in a position to help them to fund projects which will achieve that aim.

Cultivation events are great, so long as it's understood that they are the mustard to the beef, not the meat itself.

So next time you're preparing a lovely guest list for your event just remember little Bastian's face: 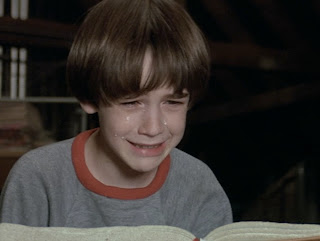 Don't let your cultivation activity go the way of Artax.

Instead, ask yourself this: when was the last time you sat down and spoke to the people on your guest list?  If the answer is... months, put down your pen and cancel the champagne order.   You need to go for a coffee and a chat.